Welcome! Today, we’re going to looking at creating and writing antagonists by comparing and contrasting the villains of Fear the Walking Dead’s excellent third season with its terrible fourth.

Season three made it into my Top Ten Shows of 2017 – a perhaps surprising choice for a series that began so appallingly. Yet a sprinkling of new cast members, the most sprawling but claustrophobic location yet and a peppering of fresh names in the writers’ room creating and writing antagonists that were gloriously broken and beautifully conflicted – et voila! – a near-perfect season.

Unfortunately, I called this quality slump when news came that actor Lennie James and showrunner Scott Gimple would make the jump from The Walking Dead to board Fear. One could say I feared Fear the Walking Dead would die its death… you went and did it and, Goddamn you all to hell, I was right.

As we approach the final stretch of FTWD4; when your final three episodes should be mercilessly ramping up towards what I call inescapable inevitability, that’s when your antagonists should be nearing their dastardly goals. FTWD3 ended with the most spectacular finale to date. FTWD4’s characters are milling around, literally looking for beer and wondering whether they should go back to save some randoms they’ve just met. The nails are firmly already hammered in Fear’s coffin. 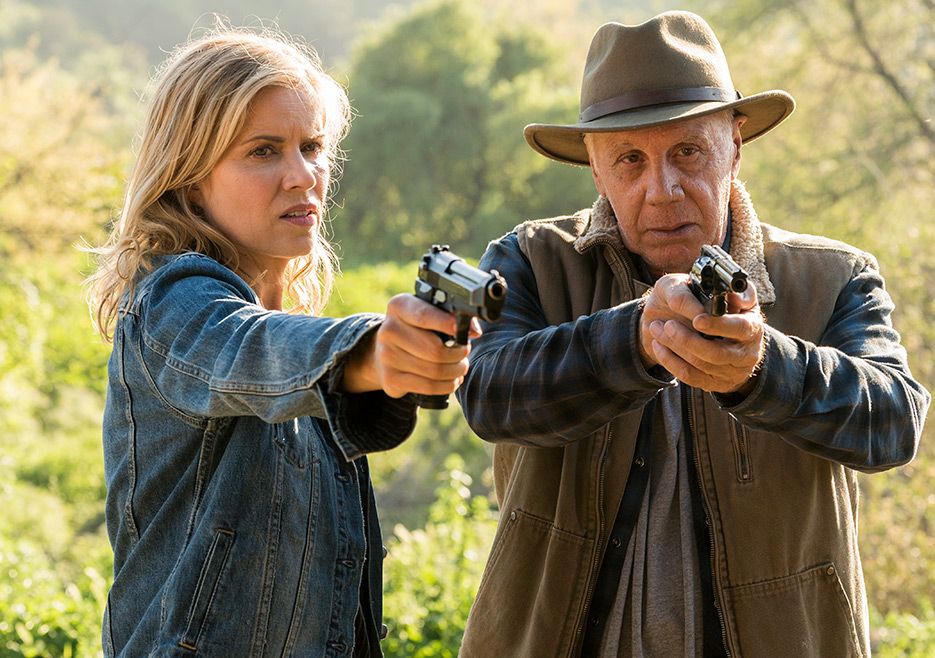 Here be spoilers for Fear The Walking Dead’s third and fourth seasons:

98.42% of what made season three so great was down to the writer’s room creating and writing antagonists who were rich veins of awfulness. The other 8.15% was down to theme and location. When Madison, Nick, Alicia, Strand et al arrived at Jeremiah Otto’s utopian Broke Jaw Ranch, it seemed like a welcome sanctuary… until it became a pressure cooker of fear, white supremacy and insanity waiting to go off.

After FTWD3 started with a bang – the unexpected but welcome sound of Travis (Cliff Curtis) spectacularly falling to his death from a helicopter, and establishing the season’s no-one-is-safe ground rules, we found out that Jeremiah (Sons of Anarchy’s wonderful Dayton Callie) and his fellow brethren had secrets. Lots of secrets. Jeremiah was an alcoholic racist, militant TEOTWAWKI survivalist and quasi-cult leader who was slowly drinking himself to death due to a King Lear-like madness.

The land that Broke Jaw Ranch and its white supremacist outlaws occupied happened to be land that the local Native Americans want back. The writers had created the perfect hotbed for conflict and including Qaletaqa Walker (Michael Greyeyes) and his nearby Black Hat Reserve people brilliantly set up an over-arching theme for the series… plus a feisty, zeitgeisty metaphor in Trump’s America.

You see, when you find yourself creating and writing antagonists in the right way, everything from character’s decision-making, location and events fall into place like dominoes in the writers’ room. Hell; create four-corner opposition and your show practically writes itself!

Meanwhile, back at the ranch, as daddy Otto spirals out of control, sons Jake and Troy battle amongst themselves to be The Man Who Would Be King. Jake is light but called to the dark. Troy is hugely disturbed, conflicted and power-hungry due to his daddy issues but called to the light.

Essentially, Jake is his brother’s keeper; forever reining Troy in as he descends into his very believable, inherited madness. It is Troy’s unpredictable yet understandable actions that drive FTWD3: Jake must keep his brother from making batshit insane decisions that endanger everyone.

Here, Jake and Troy perform the twin roles of opposite moral compasses to push and pull our gang; Jake pulling Madison, Nick and Alicia one way, Troy the other; but always towards irrevocable, game-changing moral or immoral decisions. Because that’s what great antagonists must do – create situations that make our heroes reveal what they’re made of… to bring out the best of ourselves.

Or the worst, because the best antagonists, like Troy or Heath Ledger’s Joker, force protagonists into impossible situations so they must break and act against their strongly-embedded moral codes to achieve their goals. This was exemplified perfectly in FTWD3 (and 4A) when Madison would kill to protect her family.

WHO’S AFRAID OF THE BIG BAD?

Your antagonist must want the same goal as the protagonist. Or, at least, a flipped version. So when creating your big bad, they should always be the mirror of the protagonist – i.e. they should be two sides of the same coin like Batman and The Joker fighting for the soul of Gotham. Self vs Shadow-self. Superego vs Id.

If you don’t know your Jungian archetypes, think of your protagonist and antagonist as co-dependent and narcissist; two beautiful, vulnerable bastards screaming for attention but while one uses honourable, lawful methods to get what they want, the other will go to any, immoral lengths; their Machiavellian ends always justifying their means.

Then, in your High Noon town square shootout, flip that conceit on its head, just as Batman breaks his own moral code by hacking every Gothamite’s cellphone to defeat The Joker or Han Solo learns to shoot Tobias Beckett first (before Tobias can shoot him) in the finalé of Solo. Protagonists don’t beat antagonists by being the nice guy, they beat them by becoming like the antagonist. Listen up, Democratic Party!

By creating and writing antagonists for season 3, the writers’ room understood their every act, every event was spawned by hugely interesting, conflicted three-dimensional characters’ believable backstories. However unusual, however dangerous their actions, they were driven by believable wants, needs and motivations. This is the advance-planning that led to memorable, meaningful scenes, dripping with pathos and tension.

When creating and writing antagonists for season 3, the writers understood that backstories with deep layers of psychological disorders, addiction and regret create a character’s actions.

The writers also understood that antagonists must be equal in power, and have similar goals (but opposite methods) to protagonists. The room knew their mythos too; the brother archetype so often visited in Biblical, Greek, Norse and Egyptian myth of three thousand years hence. Hella! If Thor and Loki, Cain and Abel, Castor and Pollux and Osiris and Set ain’t broke, don’t fix ’em!

Where did it all go wrong? Well, after the best season in either Fear or TWD’s almost decade-long history, the powers that be decided that Fear’s fourth season needed a dreaded “creative reboot”. A seasoned TWD writer and exec should improve things, right?

Wrong! Heading up the writers’ room, Scott Gimple has brought almost all of The Walking Dead’s many flaws with him.

After the most interesting supporting characters, Jake and Troy were killed off in the final stages of season three while the most interesting lead, Nick Clark was also unexpectedly bumped off. Fair enough, actor Frank Dillane did want to leave, but one down, one to go. Next, in the mid-season finalé, lead actress and show matriarch, Madison went out in a fiery blaze (or did she? Clue: If we don’t see a character die on-screen, expect them to come back.)

To add insult to injury, when Alycia Debnam-Carey should have been elevated to lead actress – as her character (Alicia) is now the most flawed, conflicted and only original surviving member – she was downgraded to bit-part support to accommodate a cheap PR stunt; Morgan’s arrival.

After some pleasing season 4A episodes featured a new (albeit very TWD-esque) forgettable set of big bads “The Vultures” at the baseball stadium, Morgan’s crossing over from The Walking Dead by walking from Virginia to mid-Texas enforced Fear to leap forward 2-4 years. This most unnecessary act rendered the amazing season three burst dam finalé/cliffhanger both pointless and as laughably inexplicable as Theodore S. Logan’s “I fell out of my suit (of armor) when I hit the floor.”  Such is the price to pay for PR Stunts.

Season 4B has picked up one or two likeable characters along the way; notably John Dorie and June, and featured one or two very good episodes but these are the exceptions to the rule. Without creating and writing antagonists with realistic motivations (for let me be very clear about this; zombies are not antagonists, they are as much a backdrop as a hurricane or any external force of nature) Fear’s group have had nothing interesting to do nor a clear mission statement. As such, most episodes became mere filler.

This could easily have been fixed with Kurt Vonnegut’s advice on motivation “Every character should want something, even if it is only a glass of water.”

Morgan endlessly walks roads looking for meaning or changing his mind, then changing it back again. Have I decided to be a pacifist again or not? Am I going back to The Sanctuary? Why am I so boring? After eight seasons of flip-flopping and hesitancy on TWD; who cares?

Splintered and roaming a seemingly serendipitously small stretch of Texas highway, our scattered heroes always seem to be on walkie-talkies chatting to quickly-despatched, needless randoms. There’s no urgency or closeness as our new antagonist is finally seen on screen to terrorise our gang. The only problem is, “Filthy Woman” is not a three-dimensional effect of a well-crafted backstory from the minds of writers who know their craft and, as such, she terrorises no one, never!

I’m sure we’ll get to see the tragic backstory that created her but, at present, this dreadlocked lady is a series of broad brush strokes – her face caked in mud as she poisons supply boxes left for travellers, she collects zombies and uses them to (somehow silently) attack drifters. Then she writes cryptic messages with a sharpie on her zombie’s faces…

The reason? “Oh, I dunno – because it will look cool” offered Scott Gimple (probably) and because she’s gone like really, reeaaaalllly mad and has decided her raison d’être is to teach Morgan“to be strong again” despite the fact she’s met him once and spoken to him on a walkie for a grand total 90 seconds. In other words – for no other reason other than the script desires it.

Her involvement in the machine gun truck cliffhanger was pretty cool, even if there was no meaningful set-up, but like everyone in The Walking Dead; from one-eyed The Governor, baseball bat-wielding Negan, Filthy Woman is a gimmick.

Creating one-dimensional antagonists and not posing a meaningful thematic question has a knock-on effect throughout your whole season. The impressive hurricane scattered everyone in different directions but instead of pairing characters off in the most interesting, conflicting ways, Strand and John Dorie were inexplicably stranded on a temporary island (created by the aforementioned hurricane) The only way to escape? To build a raft then row passed a crocodile.

The result? With three episodes to go in its fourth season, FTWD finally jumped the fucking crocodile.

Further evidence the show has lost its way comes when this selfsame episode devoted a ten-minute C-Story to Luciana finding an old dying man a beer. Okay, this chap, “Polar Bear” does eventually tie into the story arc, but this kind of filler will never engage your audience.

It was bad enough when Scott Gimple arrived and the show immediately began using the same, completely unnecessary, totally confusing non-linear storytelling approach as The Walking Dead to give the smoke and mirrors appearance of creativity and to try and stay ahead of the Redditors but now the unpalatable truth is clear. Just like TWD, the FTWD producers don’t know what they’re doing.

As a result of bringing in Scott Gimple, the Morgan crossover and losing the best writers who were creating and writing antagonists we loved to hate, I fear Fear’s senior year will be its last and the producers only have themselves to blame.

There are two lessons to be learnt here:

If you need help creating and writing antagonists for your script, check out my scriptwriting and editing service here.